In my previous note (Terraform workspace with multiple AWS accounts), I discussed a use case to provision VPCs in separate AWS accounts. I will be building on the same use case in this note, using YAML-based Azure Pipelines.

Then on the CD side, for each Stage (Dev, Test, and Prod), run the following:
Step 1: download the build artifact
Step 2: select a particular workspace
Step 3: run terraform plan against that workspace
Step 4: wait for manual validation (reject or resume) of the plan file created in Step 3
Step 5: if step 4 was a resume, run terraform apply

I started on the above approach, but instead of using the classic editor, I choose the YAML-based pipelines. Why? Because the YAML-based pipeline can be versioned and committed to the same code repository where the rest of the terraform configuration files reside. Storing the YAML build definition alongside the code allows someone to clone the code repository and have a running pipeline ready in no time because they’d gain access to the build pipeline too. I have a separate note on my views on YAML based Azure pipelines.

The other benefit of using a YAML-based Azure pipeline was merging the CI-CD into a single Azure pipeline. In the classic editor of Azure DevOps, I could manage only the CI steps in a build definition and create an artifact for the release definition to deploy. However, in the case of Azure pipelines, I could use Stages to implement the workflow of CI and CD both. I believe these concepts are best explained via an example.

The Powershell script (ValidateWorkspace.ps1) takes a “comma-separated list of values” as the parameter, which is the list of workspaces that have to be validated. It then iterates through the list and checks if the workspace is available/created; if not, it creates the workspace. Then it runs terraform validate against that workspace. These are the steps that I planned to include in the build algorithm.

The next three Stages: Dev, Test, and Prod, are pretty identical except for the workspace where they run. Each of these stages is divided into three jobs: plan, approve and apply.

At the end of task# 3, terraform displays the changes that will be applied to the environment. Then, I introduced another job: approve, which is a manual validation for looking at the plan and resume or reject that. If the plan seems correct, then the validation is resumed, else rejected. If rejected, the pipeline exits. If resumed, the next job: apply starts.

On successful completion of stage: Dev, the next stage: Test starts, and the same set of jobs and tasks are run. However, the workspace is updated to Test  and, similarly, for stage: Prod where the workspace is Prod.

I have the link to the Azure pipelines build log to check the different stages, jobs, and tasks applied using the azure-pipelines.yaml file (expand the Dev, Test, and Prod stages to view details of the jobs run inside them). Here is an image of the pipeline stages.

Not to forget, the terraform state files of all these stages (which are workspaces in terraform parlance) are stored separately. For example, here is an image of the workspace: Dev state file. 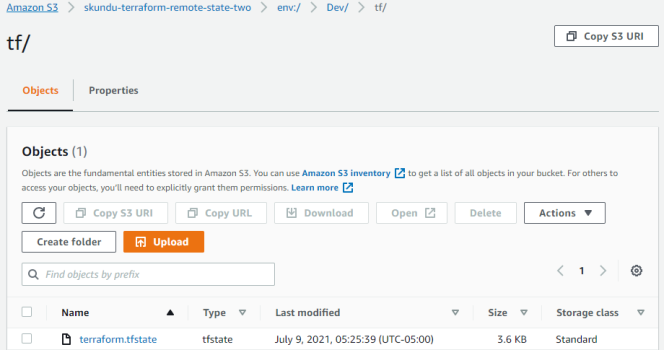 As you can see, the path to the state file is Amazon S3/skundu-terraform-remote-state-two/env:/Dev/tf/terraform.tfstate
The state file for workspace: Test is stored at Amazon S3/skundu-terraform-remote-state-two/env:/Test/tf/terraform.tfstate
Where are these values set? Check the backend.tf file in the repository.

And that brings us towards the end of this exciting concept of terraform workspace and how to automate that using Powershell and azure-pipelines.yaml

I ideated on the concept of being able to apply the same terraform configuration across separate environments in my first note. And using terraform workspace I was able to achieve that. However, there is a security observation I want to make. The state files of all the environments (AWS Accounts) are stored in the same S3 bucket of the trusted account. It might be acceptable for specific organizations. However, I believe the state file of these environments should be stored separately, possibly, in the same account where the infrastructure is provisioned. Either way, whatever decision an organization decides on, they should align with the organization’s security and compliance principles.

PS: While working on the azure-pipeline.yaml file, I identified a few alternate routes possible, and I discussed them in a later note  –YAML based Azure Pipeline approach for CI/CD of Terraform workspace.